Terminal Waltz is a concept for a "turn-based rhythm-action maze game".

Made for / during the first installment of the Eggplant Podcast Community Game Jam in February 2021.

The game is only at a "concept" stage due to:

I went into the jam with the idea that I'd likely spread work out on this project over several monthly jam periods, but even considering that, I got less far than expected. Nevertheless, I want to submit some tangible representation of my work to the official jam page because I found resonance with the theme and it heavily steered aesthetic and design decisions that I'll carry forward.

(I would like to continue work on this project--there's certainly enough design ground that I think is interesting--but I'm not sure yet if/when I will!)

My intent for this page is to share footage, design insights and an interactive prototype. Currently major parts of how movement, win/loss etc. will work are missing, so consider the game executable as "interactive concept art" and/or an "interactive game concept".

The number 3 is thoroughly embedded in the design. I set out thinking I'd make a "broughlike", but in the course of the design's organic evolution, the numerology and its relation to the grid are the only broughlike characteristics that remain.

All visuals made with the excellent Shapes by Freya Holmer.

* Talking about ill health can be uncomfortable. I want to normalize speaking of chronic health issues in hopes that it helps us all understand each other better. I apologize if this off-hand reference makes you uncomfortable. 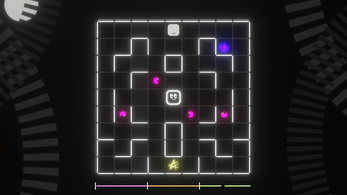 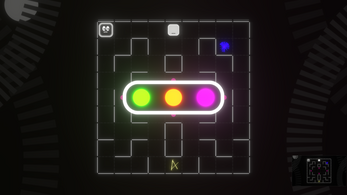 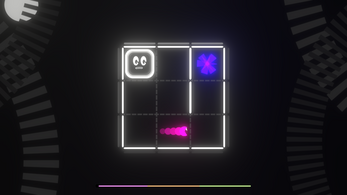